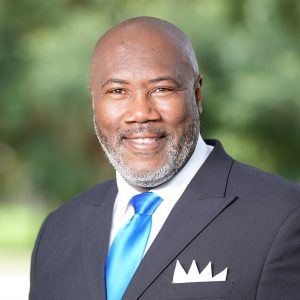 Many search a lifetime for purpose while others are fortunate enough to find their way early in life.  Terence Renard Gray’s calling in life came to him in a dream in which he found himself walking through a garden in darkness.  Although it was dark he was not afraid, for wherever he walked, he found light.  He sensed death and hopelessness in the darkness, but was able to provide life, hope and light.  At age 9 he delivered his first sermon at Allen Chapel AME Church in Calhoun, GA.  His purpose was clear.

Born in Atlanta, GA on July 20, 1965, Terence Renard Gray is the son of the late Reverend Frank M. Gray and Lillie Mae Gray.  He was blessed to grow under the wise watchful eye of his parents, great-grandmother, grandparents, aunts, and uncles.  Not only was his family supportive of Terence in the physical, they were “prayin’ folk” and also supportive of him spiritually.  The elders provided Terence with the confidence he would need to fulfill the purpose that burned in his spirit.  He believes that through the struggles and triumphs of his beloved elders, he was able to reach his potential.  At age 12 he was licensed to preach by Presiding Elder W. D. Wiggs, and at age 16, Bishop Fredrick H. Talbot admitted him into the African Methodist Church and ordained him both Itinerant Deacon in 1983 and Itinerant Elder in 1986.

A graduate of Morris Brown College in Atlanta, Terence established himself as a leader early in life.  He continued his education at the Interdenominational Theological Seminary where he received his Masters of Divinity in Homiletics in 1989.

Terence made history at Saint Paul by serving the longest tenure of any pastor.  Terence was called by God and appointed by Bishop McKinley Young during the month of November 2004 to serve as Senior Pastor of Saint Mark AME Church in Orlando, Florida.

Terence Gray’s tenure at Saint Mark has been equally exciting and impactful.  The revamping of our Educational Enterprises has richly increased the quality of our program.  The introduction of the Infant Toddler Unit and the reduction of our Alpha Learning Center’s grade level to 5th has assisted in our focus areas and propelled our student’s learning experience to an average 2 grade levels above the National Average in Math and Reading. Saint Mark has increased our Worship Services by expanding to include an East Campus location and renewed our Youth Church every Sunday.

Terence Gray has many dreams and aspirations.  He aspires to empower those who are in need, touch the lives of those who are broken, tear down the walls which divide, build a future for his family, and fight poverty and injustice.  His awards from the AME Church, the NAACP, the city of Macon and others indicate that he is effecting positive change.  The dream of walking through the darkness that he had as a child, has shaped his life and enables him to provide to those who come into his presence with the greatest gift of all – the ability to know God.

Terence Gray finds joy in the faces of his daughter, Jocelyn Bianca Gray and his two sons, Terence Renard Gray II and Tramaine Raphael Gray who he has had the joyful opportunity to watch grow and develop into adults.

Lorem ipsum dolor sit amet, the administration of justice, I may hear, finally, be expanded on, say, a certain pro cu neglegentur. Mazim.Unusual or something.